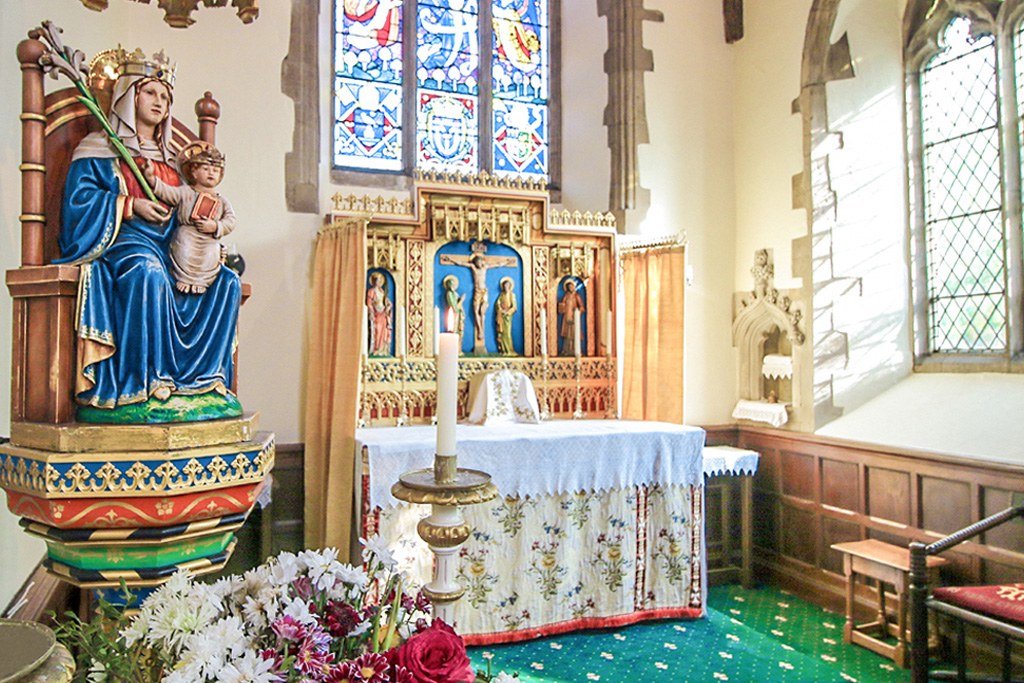 “England, great cause have you to be glad … for in you is built a mansion to the honour of the Heavenly Empress and of her most glorious salutation, the first of her joys, when Gabriel said at Nazareth “Ave”.” (Pynson Ballad 1496)

The Pynson Ballad tells us that Richeldis de Faverches in 1061, wanting to do some great work for Our Lady, was transported in a dream to Nazareth, where Our Lady told her to measure the Holy House of the Annunciation and build one similar to it in Walsingham.

It was this Saxon Holy House that brought countless pilgrims from England and abroad on pilgrimage to Walsingham. It is known that an Augustinian Priory was built beside the Holy House in 1153, the Canons of which were to care for the Shrine and its pilgrims until the Reformation.

The fame of the Shrine was enriched by many visits from King Henry III (1207-1272) and from then on, every English Monarch visited the Shrine at least once in their reign, the last being Henry VIII, who came on pilgrimage in to give thanks for the birth of a son (1511) – this child soon died, and it was providing a Tudor heir to the throne that was to be the cause of the Reformation here in England.

In 1537 The Canons of Walsingham Priory were one of the first Monastic houses to sign the Act of Supremacy, the document which estranged Henry VIII from the Pope, and in effect, created the ‘Church of England’ with the English Monarch as its Head, rather than The Pope.

Walsingham Priory and the Franciscan Friary (1347) were destroyed in 1538 and pilgrimage ceased – Walsingham slept!

In 1897 Pope Leo XIII gave permission for the Shrine of Our Lady of Walsingham to be restored. Pope Leo sent a statue to be enshrined in the Lady Chapel of King’s Lynn Catholic Church, styled after the Holy House of Loreto. Walsingham was in this parish at the time. This Pontifical Shrine still exists, even though in 1934 The Slipper Chapel (c1360) a mile south of Walsingham village was declared to be the “National Shrine of Our Lady for Roman Catholics in England”.

On the feast of the Holy Family 2015, Pope Francis raised the Slipper Chapel and the adjacent Chapel of Our Lady of Reconciliation (1981) to the status of a Minor Basilica, only the fourth ever to be created in England. 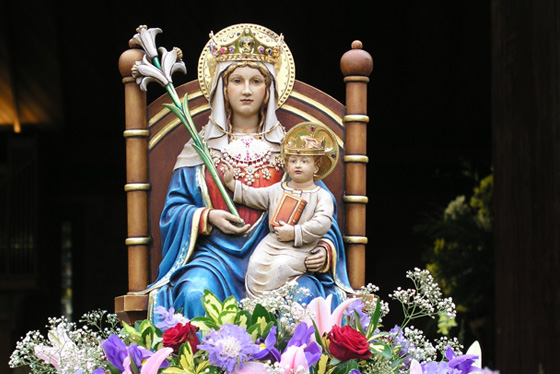 Today the Shrine attracts hundreds of thousands of pilgrims to Walsingham in a remote corner of Norfolk, despite being ill served by Public Transport with the nearest station being 26 miles away at either Norwich or King’s Lynn.

While the Shrine is open all year and celebrates all the Feasts and Seasons of the Church, the annual Pilgrimage Season begins on Palm Sunday with a pilgrimage of the Filipino communities here in England, thousands come bearing their various tableaux of Christ’s Passion.

From Easter through to the middle of October, each weekend sees an endless carousel of pilgrimages.

Pilgrimages from the various Dioceses and Parishes of England and other groups, representing the variety of traditions making up today’s 21st century Catholic Church, come and go in procession along Walsingham’s leafy roads and pilgrim paths. Many pilgrims come from Europe and the U.S.A.

The Rector of the Shrine, appointed by The Bishop’s Conference, is assisted in the spiritual care of the pilgrims by a Franciscan Community based in Walsingham.

There is a full Pilgrim Programme each day, with the mid-day Pilgrim Mass at the Basilica the high-point of each pilgrimage.

Details of the Pilgrimage Calendar and the daily Pilgrim Schedule can be found on our web-site at www.walsingham.org.uk. There you will also find details of our pilgrim accommodation at Elmham House and information about our Retreat Programme at Dowry House, both houses being in Walsingham Village.

In Walsingham Village there is also an Orthodox Chapel and a Church of England Shrine which was built in the 1930’s and has within it a replica of the medieval Holy House.

Walsingham with its various shrines is still a place where Mary’s joy at the Incarnation is daily remembered.

“Therefore, Blessed Lady grant thou thy great grace,
to all that thee devoutly visit in this place”
Pynson Ballad