The Shrine of Our Lady of Dublin, Whitefriar Street Church 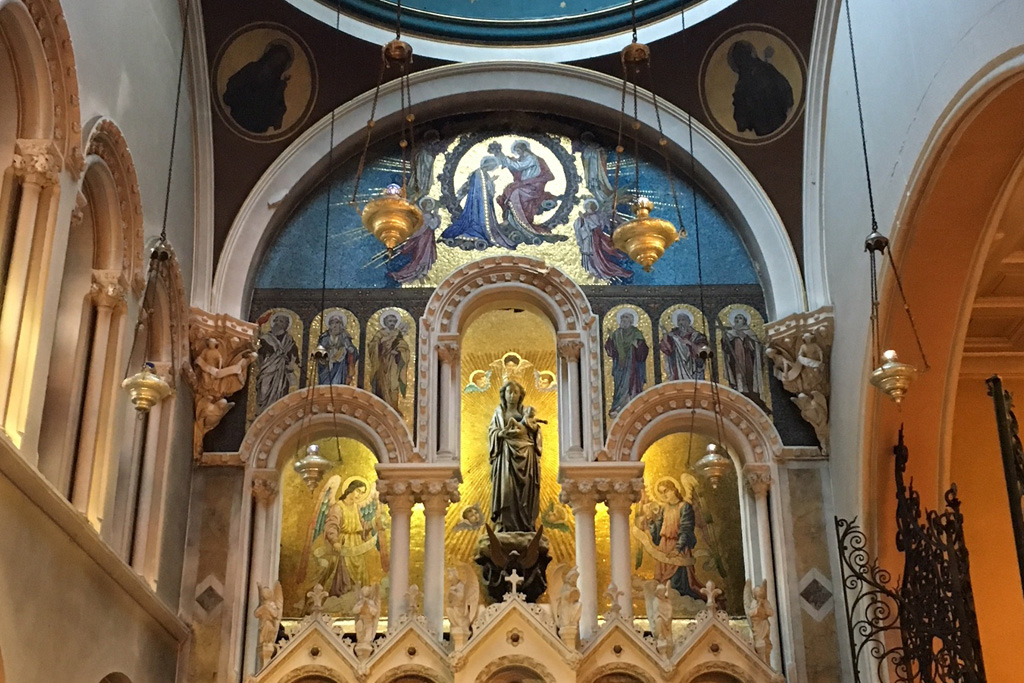 The Shrine of Our Lady of Dublin, Whitefriar Street Church

Ireland is fortunate in that she still possesses a number of ancient wooden sculptures, including several of Our Lady and a few of the Irish saints. The oldest of these figures is the twelfth century Madonna and Child from Kilcorban, Co. Galway. The figure venerated in the Carmelite church today under the title of “Our Lady of Dublin” has been compared in style to some of the early sixteenth-century sculptures in the Henry VII chapel at Westminster, and is probably of this period. It is a life size figure in oak, showing Our Lady holding her Child. Originally brightly painted, the figure had been later whitewashed over, unfortunately, the removal of the whitewash in 1914 also took off the ancient polychrome surface as well. The extended arm of the Child is a modern restoration.

It is said that this statue originally belonged to St. Mary’s Cistercian abbey on the north bank of the Liffey in Dublin. This abbey was frequently visited both by the English nobility and by royal officials from England who. stayed there when in Dublin. Thus it would not be surprising to find the Dublin Cistercians in possession of a statue belong-ing to the same school of art as some of the sculptures in Westminster Abbey. St. Mary’s was surrendered in 1539, at the Reformation, and the statue is said to have been used as a trough in an adjacent inn yard. It was common practice to hollow the backs of such wooden figures, both to reduce weight and prevent the wood warping and splitting; thus laid face down, the figure could form a shallow trough for pigs.

It is first mentioned in an account of the Catholic chapels of Dublin written by an unnamed Protestant in 1749. This states that “In Mary’s Lane is a parochial chapel whose jurisdiction extends from one side of Boot Lane to one side of Church Street. It is a large and irregular building. On the Epistle side of the altar stands a large image of the Blessed Virgin with Jesus in her arms, carved in wood; which statue at the dissolution belonged to St. Mary’s Abbey”. Mary’s Lane chapel was served by the Jesuits; its site is now occupied by a block of flats called St. Michan’s House. In 1816, the old chapel was converted for use as a school and a new church erected in St. Michan’s parish. The whitewashed figure appears to have been discarded, and found its way into a secondhand shop in Capel Street. Here, Father Spratt of Whitefriars saw it in 1824 and immediately went in and purchased it, for a nominal sum.

Although Dr. Spratt saved the figure, the ancient silver crown that went with it was sold for the value of the metal and melted down. The last account of the crown is given by the distinguished archaeologist Petrie, who saw it in a jeweller’s window waiting sale. He said that “it was a double arched crown such as appears on the coins of Henry VII and on his only: a circumstance which marks with exact precision the age of the statue which it had adorned”. Petrie’s dating of the crown, and thus the statue, corresponds with the dating of the statue on stylistic grounds by comparison with the work in Westminster Abbey. But if the crown really belonged to the statue, it raises a grave doubt of the truth of the story of the use of the statue as a trough, and suggests rather that crown and figure were concealed together in some hiding place at the Reformation and subsequently restored for Catholic veneration to some Catholic chapel as soon as it was safe to do so. It may well have been venerated elsewhere before it appears in the Mary’s Lane chapel.

Dr. Spratt placed the statue on the Epistle side of the high altar in the new Whitefriars church. In 1915, after the figure had been cleaned, the shrine of Our Lady of Dublin was formally erected in the Carmelite church.

Share This
Previous Post
History of the shrine of Our Lady of Europe Gibraltar
Next Post
Worldpriest participates at the World Meeting of Families 21-26 August 2018, in Dublin’s RDS