The Shrine of the Blessed Virgin Mary of Ta’ Pinu – Gozo, Malta 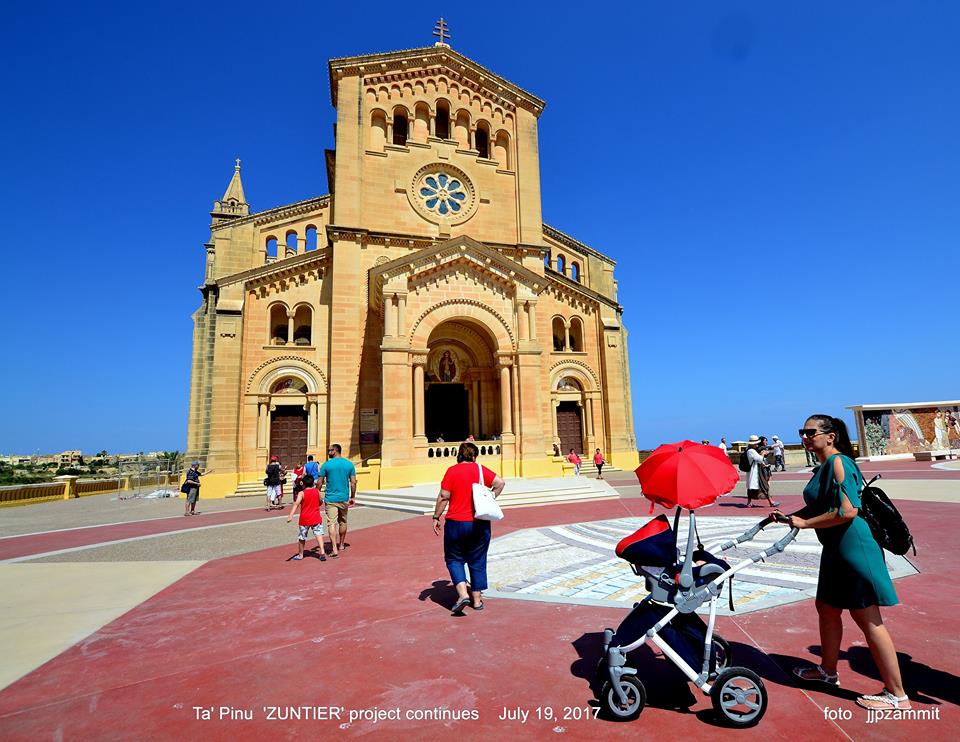 The Shrine of the Blessed Virgin Mary of Ta’ Pinu – Gozo, Malta

The origins of the Shrine of the Blessed Virgin Mary of Ta’ Pinu are lost in the midst of time. The small chapel, known as “Tal-Ġentili”, dedicated to the Assumption of the Blessed Mother of God existed before 1545 when it is recorded to have been rebuilt. In 1587 the church property changed hands and consequently its name, from “Tal-Ġentili” to “Ta’ Pinu”. This happened because Pinu Gauci became the procurator of this church in 1611. He sponsored its restoration and in 1619 commissioned the painting of the Assumption of Our Lady for the main altar, which was accomplished by the Maltese artist Amadeo Perugino.

On the 22nd June 1883, Karmni Grima a forty-five year-old spinster and great devotee of the Blessed Virgin, heard a call, while passing by the chapel on her return home from the fields around 10.30a.m. She heard a mysterious voice calling: “Come, come”. Having entered the chapel and recited the usual prayers, the voice from the painting of the Blessed Virgin, asked her to recite 3 Ave Maria in honour of the 3 days her body remained in the tomb before Her Assumption to Heaven. Karmni revealed her secret to a friend, Franġisk Portelli, who in turn told her that about the same time he had also heard the mysterious voice asking him to say prayers in honour of the Hidden Shoulder Wound which Jesus incurred whilst carrying the cross. A short time later, Francesco’s mother was miraculously healed by the intercession of the Blessed Virgin Mary of Ta’ Pinu. Eventually the lonely chapel became a place of pilgrimage for many people on the island and beyond.

It was in 1919 that the building of the new Sanctuary, which incorporated the original chapel, started and was consecrated and opened for public worship on 13 December 1931. In 1932 it was raised to the dignity of a Minor Basilica. While in 1935 the miraculous image of the Blessed Virgin of Ta’ Pinu was crowned by Cardinal Alessio Lepicier. The most important event was the visit of Pope John Paul II, which occurred on 26 May 1990. Following the concelebrated mass on the Sanctuary Parvis, he venerated the miraculous image by decorating it with five golden stars, as testimony of our people’s love to the Blessed Mother. Later on 18 April 2010 Pope Benedict XVI, on his visit to Malta, adorned the holy image with a Golden Rose. While addressing the crowd gathered at Floriana Granaries, before he recited the Regina Caeli, Pope Benedict expressed his great satisfaction: “I am aware of the particular devotion of the Maltese people to the Mother of God, expressed with great fervour to Our Lady of Ta’ Pinu… I am also delighted to present a Golden Rose to her, as a sign of our shared filial affection for the Mother of God. I ask you in particular to pray to her under the title Queen of the Family…”.

In June 2017, the Sanctuary Parvis was adorned with a set of twenty mosaics representing the Mysteries of the Holy Rosary, which were made by the Centro Aletti of Rome, under the supervision of renowned artist Marko Ivan Rupnik SJ. The mosaic walls embracing the parvis have now changed the area in front of the Basilica into a space of meditation and prayer.

The Sanctuary Museum
In this place you can admire the original paintings of two great Maltese masters: Giuseppe Briffa (1901 – 1987) and Emvin Cremona (1919 – 1987). This unique exhibition consists of 12 paintings by Giuseppe Briffa and other 20 works by Emvin Cremona. These paintings, representing episodes from the life of the Blessed Virgin Mary, were used as the basis for the mosaics made from ceramic tesserae by Ferrari and Bacci Studio of Pietrasanta, Italy and which now adorn the Ta’ Pinu National Shrine. On their return these paintings were subsequently stored in a closet in the chapel and eventually laid down forgotten. Briffa’s works reflect the epoch in which they were made, that is, the second part of the twentieth century with their peculiar style and they compliment the majestic and beautiful temple that was built in honour of the Virgin Mother of God in the Romanesque style. They are designed with a certain docility and grace and with the use of clean colours on the basis of the tempera. The paintings have been restored by Fr Charles Vella, a Gozitan restorer, with the collaboration of Joanna Hili Micallef. The restoration works were partly financed through ERDF funding under the project title “Discovering Cultural and Religious Tourism in Gozo’.

At Ta’ Pinu Basilica, Cremona has the largest collection which, without any doubt, expose his artistic qualities. The 20 works were completed between the years 1954 and 1962. The project for the restoration of the 20 paintings has been supported throughout by the Bank of Valletta. In this museum there are other interesting objects, such as a silver heart ex-voto containing a record of one of the first organised pilgrimages to the shrine in 1895. There is also a cabinet dedicated to items from the visit of Pope John Paul II and another one dedicated to Pope Benedict XVI who visited Malta in 2010.

Museum: Dar Karmni Grima
If you want to complete the Ta’ Pinu experience, it’s a must to visit the residence of Karmni Grima, who heard the voice of the Blessed Virgin of Ta’ Pinu. It is only one kilometre away from the Ta’ Pinu Basilica, on the way leading to the village of Għarb.
Although this is a typical Gozo farmhouse, where one can appreciate the way of life in rural Gozo in the 19th Century, it is a unique abode, having witnessed the birth, life and passing away of Karmni Grima. Extant documents written by her spiritual director, tell us that Karmni had a number of supernatural apparitions even in this house. It comes as no surprise that the inhabitants of Gharb and almost all Gozitans
have always held Karmni as a saintly woman. For this reason we ask you to visit this place with due respect for this dear person. The Museum houses a number of exhibits and artefacts related to Karmni Grima and Franġisk Portelli, the other youth who also heard the calls from the Virgin Mary on other occasions. Yet the events Karmni Grima lived, might as well become your own, as The Blessed Virgin of Ta’ Pinu continues to beckon you from Her Sanctuary echoing her call: “Come, Come…”. The Blessed Virgin’s call persists through the ravages of time inviting people to go to her and experience God’s love.