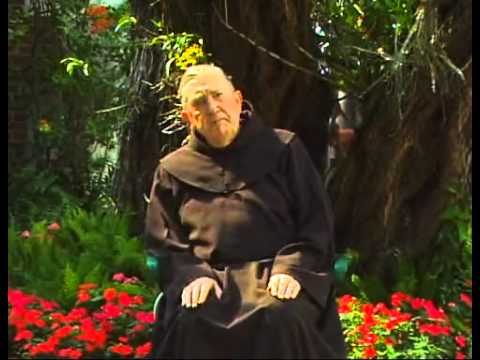 Worldpriest invites you to journey with us each month along with Father Clifford a truly remarkable and holy priest, who touches the very fiber of our being with his wisdom and deep insights into life.

Fr. Leo Clifford, OFM, was born March 21, 1922 in Killarney, County Kerry, Ireland, and was baptized Diarmuid Brendan. He received his elementary education at the school of the Presentation Brothers in Killarney and attended St. Brendan’s College there, graduating in 1939. He then studied for two years at St. John’s Seminary, Waterford, before entering the Order at the friary in his hometown in 1941, receiving the name Leo. He professed final vows in 1945 and was ordained in 1946.

Following ordination, Fr. Leo was first stationed in Limerick from 1947 to 1950. He was then assigned to the friary on Merchants Quay in Dublin in 1950, where he developed an extensive preaching ministry. Fr. Leo also taught theology at St. Mary’s College and served as chaplain to the Catholic Actors Guild. During this time, he spent some months in Manchester, England, learning radio techniques at the BBC under the noted Fr. Agnellus Andrew, OFM, a pioneer in Catholic communications.

In 1954, Fr. Leo received permission to come to the United States. For the next 50 years, he devoted himself to preaching, chiefly retreats and days of recollection for priests and religious. Over the years, he was based at St. Francis of Assisi Friary, New York City, St. Bonaventure Friary, Paterson, N.J., and then, from 1967 to 2003, at St. Stephen of Hungary Friary, New York City, where he became a familiar figure, helping out in the parish on weekends when he was not on the road.

Fr. Leo maintained his extensive European connections. In 1962, he was asked to serve as English-language secretary to Cardinal Leo Suenens of Malines-Brussels at the Second Vatican Council. After a sabbatical year in 1993, Fr. Leo formally transferred from the Franciscan Province of Ireland to Holy Name Province. Although he began to slow down his traveling in the 1990s, videos of his talks continued to be broadcast daily on the EWTN television network. In 2003, he retired to St. Anthony Residence in Boston, but continued to serve as a confessor at St. Anthony Shrine, where he had a sizeable following. In 2010, he transferred first to St. Anthony Friary, Butler, N.J., and then to Holy Name Friary, Ringwood, N.J.

Father Leo Clifford – how we handle our failures.

Share This
Previous Post
Were you one of the ten million people who created this amazing breakthrough of a world at prayer ?
Next Post
The Shrine of the Blessed Virgin Mary of Ta’ Pinu – Gozo, Malta