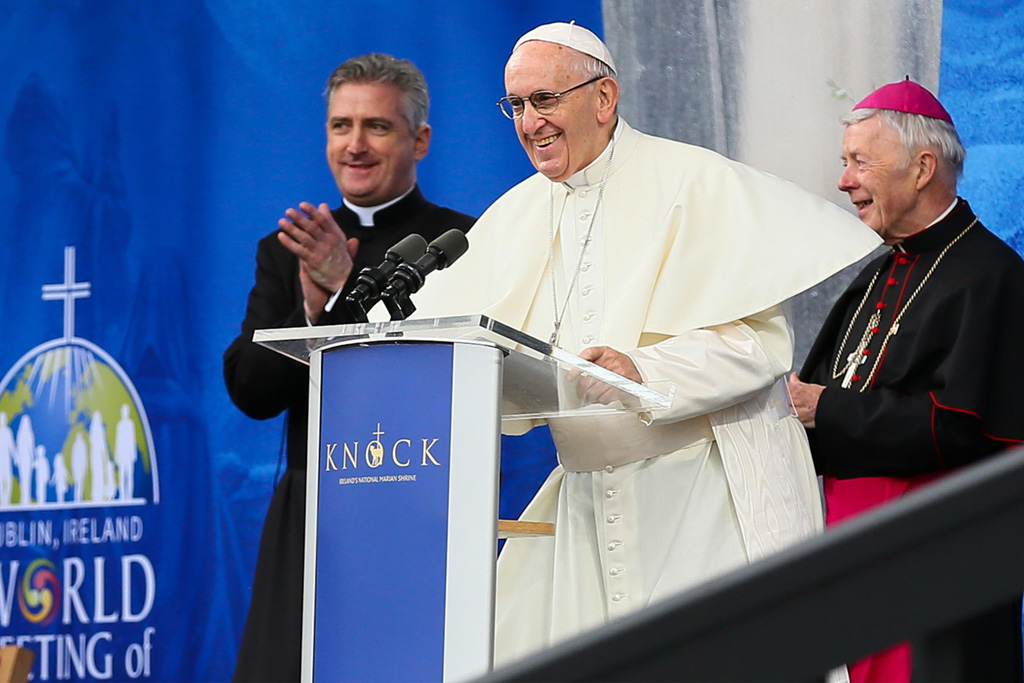 The story of Knock began on Thursday evening of 21 August 1879, when the Blessed Virgin Mary, St Joseph and St John the Evangelist appeared at the south gable of the Parish Church at Knock, County Mayo, Ireland. Beside them and a little to their left was an altar with a cross and the figure of a lamb, around which angels hovered.

There were fifteen official witnesses to the apparition – young and old – who watched and prayed for two hours in the pouring rain. The witnesses were ordinary people from the village of Knock and the surrounding hinterland.

Two Commissions of Enquiry, in 1879 and 1936, accepted their testimony as trustworthy and satisfactory. Today, Knock ranks among the world’s major Marian Shrines. Pilgrims come here seeking peace and prayer and to enjoy the beautiful landscaped gardens, meandering pathways and the wonderful sense of peace and calm.

Knock Shrine has a unique history and a number of beautiful churches as well as a rich offering of services and facilities, including an award-winning museum, a prayer centre, youth ministry, counselling centre, a contemporary café and excellent bookshop with a wide range of spiritual and religious books and resources. There are five chapels at Knock, where ceremonies take place daily. The iconic Knock Basilica houses the Apparition Mosaic, a magnificent piece of artwork representing the Apparition of 1879. The beautiful stations of the cross recently installed in the basilica are the work Westport-based artist Ger Sweeney, using oil on linen.

The official pilgrimage season begins on the last Sunday of April and ends on the second Sunday in October. During this time there are daily ceremonies at the shrine, including Mass, stations of the cross, anointing of the sick, confessions, rosary processions and Eucharistic adoration.

Diocesan and other organised group pilgrimages take place every weekend throughout the pilgrimage season. Group visits are also invited to attend private Mass in the apparition chapel and they can learn more about the fascinating story of Knock with a guided tour of the grounds and gardens, followed by a visit to Knock museum.

The highlight of the pilgrimage season is the National Novena to Our Lady of Knock which takes place from the 14–22 August each year. The novena includes two daily ceremonies with an evening candlelight procession. Guest speakers are invited to speak during the novena ceremonies and to deliver workshops that cover a range of themes and invites pilgrims to share and discuss.

On Sunday 26 August, His Holiness Pope Francis blessed us with an official papal visit as part of the World Meeting of Families 2018. Knock Shrine was the only destination outside Dublin visited by Pope Francis and it was chosen personally because of his particular adoration for Our Lady. This was a tremendous honour for the Shrine and the Catholic faith here in the West of Ireland.

Groups and pilgrimages can avail of private Mass and guided tours, all of which can be arranged by getting in touch at www.knockshrine.ie or by emailing: info@knock-shrine.ie

‘Sacred space’
I have visited Knock Shrine on several occasions. My most recent visit was in January 2017. It is a perfect place to visit for some time out from the mad world around us. Peace and tranquillity prevails within the grounds – a perfect spot to meditate and pray. I found the time I spent in the apparition church in the quiet of the evening very special.

‘An experience of calm and peace, a refreshing escape from today’s world’
An entire day could easily be spent at this national shrine! The basilica alone is beautiful beyond words … regardless of which side of the amazing altar you are on. The grounds are impeccable and display brilliantly coloured flowers.

‘Outstanding’
Totally amazing, beautiful and very peaceful. Its surroundings were out of this world and the feeling around this shrine was amazing.

‘An oasis of peace and calm’
We called in to see the shrine of Our Lady of Knock on our way home from a trip to Achill Island and it was a wonderful peaceful experience. We arrived at the site and went to the small apparition chapel first. Then we took a self-guided tour of the museum, which was excellent. It gave a really good overview of the history of the site and about what life was like in Ireland in 1879, placing the apparition in its historical context. The basilica is a very beautiful modern church, circular in design. We were unable to stay for Mass, but we still came away from the site feeling very moved. We actually lost track of time during the visit. A definite must-see site, a peaceful calm oasis in a busy world. 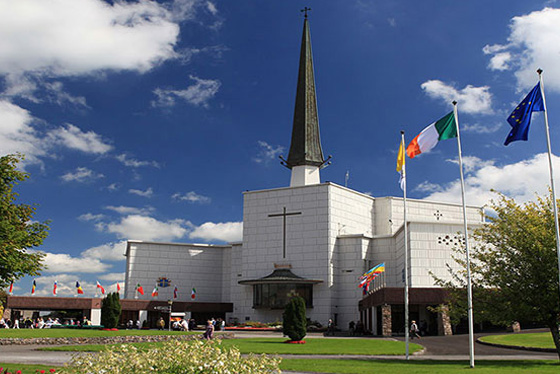