Mexico’s shrine of Our Lady of Guadalupe 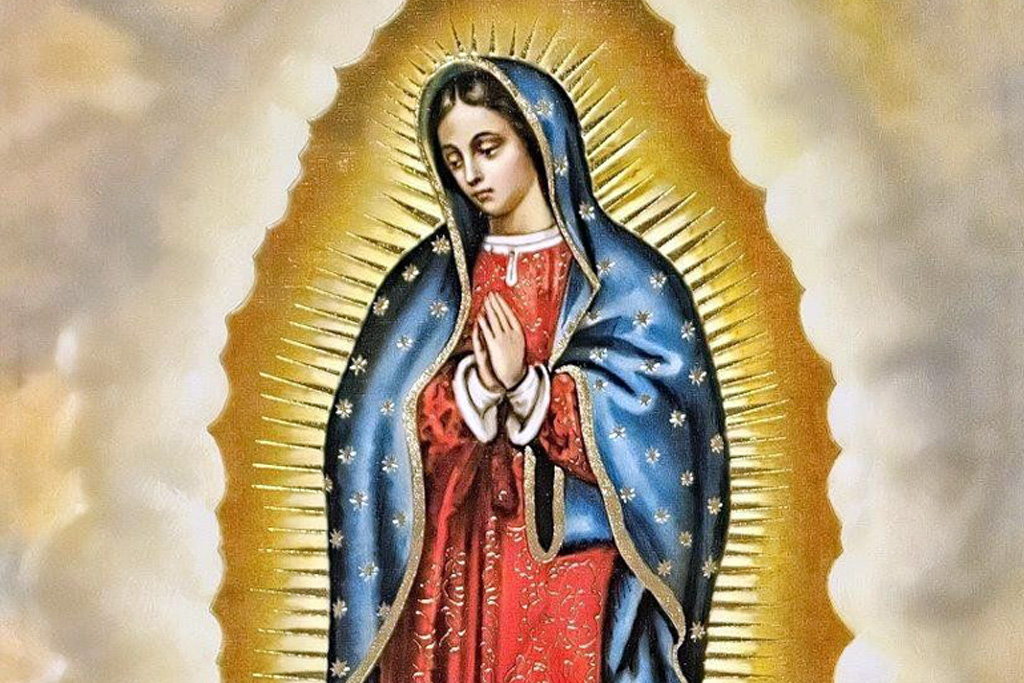 Mexico’s shrine of Our Lady of Guadalupe

There were five apparitions recorded at Guadalupe in Mexico.

The first apparition: At dawn on 9 December 1531, Juan Diego, an Indian convert, was going to Tlatelolco to attend catechism class and hear Mass. As he was passing Tepeyac Hill, he saw a brilliant light on the summit and heard the strains of celestial music. Filled with wonder, he stopped. Then he heard a feminine voice asking him to ascend. When he reached the top he saw the Blessed Virgin Mary standing in the midst of a glorious light, in heavenly splendour. The beauty of her youthful countenance and her look of loving kindness filled Juan Diego with unspeakable happiness as he listened to the words she spoke to him in his native language. She told him she was the perfect and eternal Virgin Mary, Mother of the true God, and made known to him her desire that a shrine be built there where she could demonstrate her love, her compassion and her protection. “For I am your merciful Mother”, she said, “to you and to all mankind who love me and trust in me and invoke my help. Therefore, go to the dwelling of the Bishop in Mexico City and say that the Virgin Mary sent you to make known to him her great desire.”

The second apparition: The bishop was reluctant to believe Juan Diego’s story. Juan returned to Tepeyac Hill where he found the Blessed Virgin waiting for him, and told her of his failure. She bade him return to the bishop the next day and repeat her wishes.

The third apparition: The bishop then requested that the lady give him a sign. Juan reported that evening and she promised to grant his petition on the following morning. But Juan was prevented from coming because of a sudden and severe illness of his uncle, Juan Bernardino.

The fourth apparition: Two days later, on 12 December, as he was going to the church at Tlatelolco to bring a priest to his dying uncle, Juan Diego was stopped by the lady, who had come down from Tepeyac Hill to meet him on the road. She listened quietly to Juan’s excuse for not having kept his appointment with her the day before. When he had finished speaking she said, “It is well, littlest and dearest of my sons, but now listen to me. Do not let anything afflict you and be not afraid of illness or pain. Am I not here as your mother? Are you not under my shadow and protection? Are you not in the crossing of my arms? Is there anything else you need? Do not fear for your uncle for he is not going to die. Be assured … he is already well.”

Having heard these words, Juan Diego rejoiced and asked for the sign he was to take to the bishop. He was told to climb to the top of the hill where she had spoken to him on previous occasions. She said he would find many flowers blooming there, which he was to cut and bring to her. Juan Diego did as he was told though he knew no flowers had ever bloomed before on the stony summit. He discovered a marvellous garden of dew-fresh blossoms which he cut as she had asked. Placing them in his rough cloak, or tilma, he brought the flowers to the Lady who rearranged them and told him to take them to the bishop, telling him that this was the sign to the bishop to persuade him to carry out her wishes.

When Juan Diego, radiantly happy, stood before Bishop Fray Juan de Zumarraga and told him of the fourth encounter with the lady, he opened his tilma to show the bishop the sign. The flowers cascaded to the floor, but to the astonishment of the bishop and Juan Diego, there appeared upon the coarse fabric of the Indian’s mantle a marvellously wrought, exquisitely coloured portrait of the Blessed Virgin, just as Juan Diego had previously described her.

The fifth apparition: Earlier that same day, 12 December, she had also appeared to Juan’s uncle, Juan Bernardino, and restored him to health as she had told Juan Diego. Juan Diego was at that time 57 years old; his uncle was 68. Both had been among the first of the natives to be baptised into the true faith several years before. 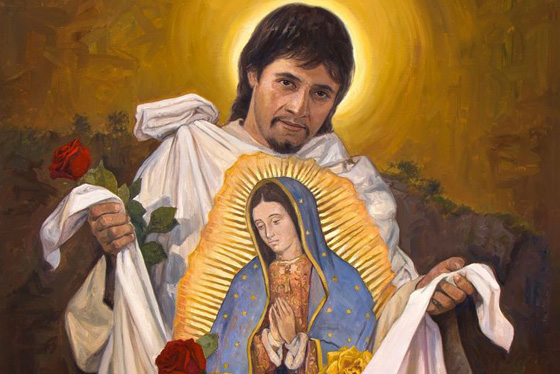 The name of Guadalupe
Juan Bernardino told his nephew the Blessed Virgin had ordered him to relate to the bishop in what miraculous manner she had cured him. She also told Juan Bernardino her image was to be known as Santa Maria de Guadalupe and thus she has been venerated by this title for nearly five centuries.

The mantle of Juan Diego
The mantle or tilma on which the Sacred Image of the Blessed Virgin is imprinted is handwoven from the fibres of the Maguey cactus, a fabric that has a life span of little more than thirty years. It is six-and-a-half feet long by forty-two inches wide and has a seam running down the middle.

The sacred Image
Directly on this rough, burlap-like material is the exquisitely delicate figure of Our Lady, four feet, eight inches in height. This authentic portrait of the Virgin Mary has remained fresh and lovely for nearly five centuries and may be viewed today at the Basilica of Our Lady of Guadalupe in Mexico City where it occupies the place of honour above and behind the main altar.

The pictograph
The Sacred Image is a pictograph or picture writing, with every detail symbolic. She is brighter than the sun. Her foot rests upon the moon. The stars on her mantle are in the same relative configurations as the stars in the heavens on the morning of 12 December 1531. The northern constellations are on her right, with the southern constellations on her left. Furthermore the golden filigree over her rose-coloured gown matches the topography of the Mexican lands once ruled by the Aztecs.

Despite more than twenty-two languages and almost fifty dialects spoken at that time, all were able to read and understand what was contained in that sacred Image. So it was in this manner that eight million natives were converted to Christianity in the incredibly short span of seven years.

The chapels
On 26 December 1531, two weeks after its marvellous appearance, the sacred Image of the Blessed Virgin was moved from the bishop’s oratory to the new hermitage at the foot of Tepeyac Hill. Thousands of church and civil dignitaries, Indians and Spaniards made up the colourful procession. This little chapel was enlarged and renovated several times before 1622 when a second larger church was completed.

In 1667, a chapel was built on the hill to commemorate the first three apparitions. El Cerrito was rebuilt in 1957 and shares the hilltop with a Carmelite convent and a cemetery.

In 1695, the church of the Indians was completed. It was next to the hermitage, which served as its sacristy, and housed the sacred image, while the church of 1622 was razed to make room for the first basilica.

In 1787, the convent of the Capuchin Sisters was built adjoining the Basilica of 1709 in order to have a place for perpetual adoration of the Blessed Sacrament. For the seven years, seven months and seven days prior to completion of the renovation of the basilica on 30 September 1985, the sacred image was housed there.

The first basilica
The first basilica was completed in 1709 and the sacred image was installed above the high altar for the veneration of all. This basilica is undoubtedly one of the most beautiful churches in the Western Hemisphere. Constructed of red volcanic rock and sandstone, it is 184 feet long by 122 wide. The bell towers rises 108 feet and the dome 124 feet.
Six enormous oil paintings and many smaller works of art decorate the walls and depict Guadalupan history. Life-sized sculptures of Bishop Zumarraga and Juan Diego kneel reverently at the sides of the white Carrara marble altar, above which the sacred image was enthroned until its transfer to the new Basilica on 12 October 1976. The structure has since been converted to a museum.

The new basilica
A large cross and the symbolic Marian ‘M’ gracefully top the majestic upsweep of the new basilica, rising almost 150 feet into the sky from its huge semi-circular base. Nine small chapels are arranged around a balcony at the rear of the basilica, which holds 10,000 people. Easily seen from anywhere inside, ensconced above and behind the red seats for visiting prelates, behind the main altar, is the sacred image of Our Lady of Guadalupe. The image is behind bulletproof glass, with three frames. This includes a gold and silver frame, both five inches wide and a bronze frame, fourteen-and-a-half inches wide. Below the Image, three ‘moving pavements’ carry pilgrims and devotees past the image, only thirty-five feet above.

On the left of the main altar is the chapel of the Blessed Sacrament. To the right is the Saint Joseph Chapel, where the Canons of the Basilica recite the daily office of Our Lady of Guadalupe.

The crown
On 12 October 1895, by decree of Pope Leo XIII, the image of the Blessed Virgin of Guadalupe was crowned, with great solemnity. On 12 October 1945 the fiftieth anniversary of the crowning, Pope Pius XII proclaimed her Patroness of all the Americas. Above the frame there is always a replica of the 1895 crown. Made in Paris, the crown contains jewels and precious stones donated by the ladies of Mexico City. It is valued at more than two million pesos.

A second crown was donated to Our Lady of Guadalupe in 1945 by the people of Mexico. It was made by a team of eighteen artists who were directed by a famous lapidary. It weighs thirty-two pounds. Other valuable crowns have been donated over the years by many groups, including the goldsmiths and silversmiths of Mexico.

The Mass and Office
Our Lady of Guadalupe has a special Mass in the Roman Breviary on 12 December. It is a Holy Day of Obligation in Mexico, with Octave and double rites of the first class. The Sanctuary of Guadalupe is equal in rank to the Lateran Basilica (second only to St. Peter’s) and the Abbot and Canons have been assigned vestments different from all others.

Words of Our Lady of Guadalupe to Juan Diego
“Know for certain, least of my sons, that I am the perfect and perpetual Virgin Mary, Mother of the True God through whom everything lives, the Lord of all things near and far, the Master of heaven and earth. It is my earnest wish that a temple be built here to my honour. Here I will demonstrate, I will exhibit, I will give all my love, my compassion, my help and my protection to the people. I am your merciful mother, the merciful mother of all of you who live united in this land, and of all mankind, of all those who love me, of those who cry to me, of those who seek me, of those who have confidence in me. Here I will hear their weeping, their sorrow, and will remedy and alleviate all their multiple sufferings, necessities and misfortunes.”

(Reproduced with the kind permission of Alan Napleton, board member Queen of the Americas Guild.)